​​I was born August 10, 1999 in Washington D.C. I lived in Hyattsville, Maryland until I was 4 years old and then moved to College Park. I'm the oldest of 4 girls in a Hispanic family from El Salvador. I grew up with a passion for music, writing and drawing since I first picked up a pencil. I would sing in my church almost every weekend and dreamed of one day making my own music and writing a story that actually meant something to people, who would understand the message I was trying to send out. When I was in Elementary school at Hollywood Elementary school, I was always the first to raise my hand and volunteer to sing a solo. When I was in 2nd grade I signed up for a book writing contest and won 2nd place in the Children’s book division. When I was in 4th grade I drew a portrait of Martin Luther King Jr. for a Black History Memorial contest and won 1st place. Growing up I was never really afraid to compete against people or work with them, I've always stood by my own terms to have courage and be kind and never lose faith in one’s self. I currently attend Suitland High School and am a student in the Visual and Performing Arts program for singing. Last year, When I attended the State Solo and Ensemble regionals and was marked a 2 as my State Ranking. I have been writing since Middle school and started writing music in High school. I continue to spreading the words I write on the pages of my journal and inspiring the next generation.

Juwan Blocker is an 11th grade student at Parkdale High School in Prince George’s County. Mr. Blocker was an intern for Congresswomen Donna Edwards for Senate, is a member of Prince George’s County Young Democrats, Former candidate for Student member of The Prince George’s County School Board, Student Leader, Community Organizer, Advocate and Activist fighting to ensure that the student voice is represented. At Parkdale he serves as the school’s Youth Political Analyst, Lobbyist for the Prince George’s Regional Association of Student Governments, and serves as the Legislative Chair on the Maryland Youth Advisory Council. Aside from Politics Mr. Blocker is the president of “Lyrikal Storm” poetry collective and was a finalist at the 2015 “Louder than a Bomb” poetry slam for high schools in the greater Washington, D.C. area. He performed alongside Clinton Smith who held the title as the world’s 5th ranked poet and Neville Adams a world renowned poet. He is passionate about closing the achievement gap in education, student awareness, student advocacy and youth civic engagement. He wants to continue to be an advocate for the people by becoming a public servant when he gets older. 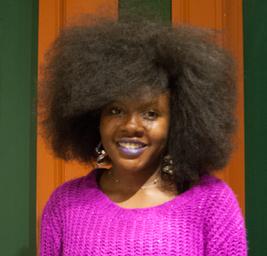 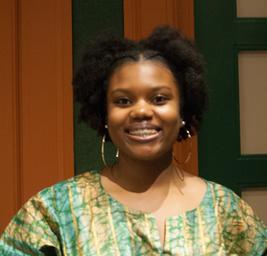 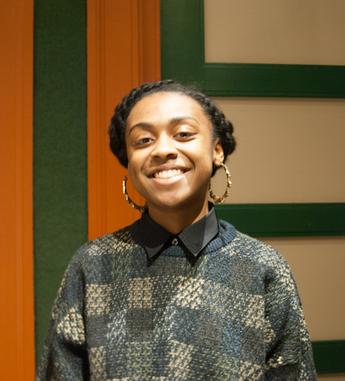 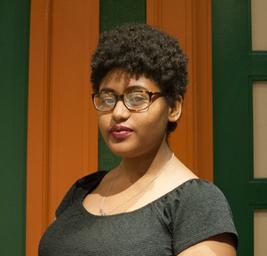 ​​Jocelyn Nolasco is currently a first year Government and Politics major at the University of Maryland, College Park. She is currently a student in the Incentive Awards Program, which is a program dedicated to helping students in need from Prince George’s County and Baltimore City through providing professional development opportunities as well as a scholarship component that covers tuition, room and board, and meals. She is also a student in the Justice and Legal Thought program through College Park Scholars, which is a program students are invited into before they begin their first year at the University. Currently working as an office assistant for the University of Maryland’s Upward Bound/Upward Bound Math and Science program, Jocelyn has always focused on providing better opportunities for the next generation. She gets her motivation mainly from her family, as her father immigrated to America during the Civil War in El Salvador. Her mother also immigrated in the eighties and both parents came with the goal of providing a better life for their families. She has an older sister, who is a Hearing and Speech major as well as an Incentive Awards Recipient herself, a younger brother in high school interested in Biomedical engineering, an energetic younger sister in elementary school, and a lovely baby sister. She is also motivated to share her story with the students she works with, as she was a Junior Tutor Counselor/SIB for the Upward Bound program in the summer. She emphasizes the importance in the power of voice and ideas, as she was the 2014-2015 Public Relations Coordinator for the Prince George’s Regional Association of Student Government and was a candidate for the Hyattsville City Council after successfully helping to push to lower the voting age to 16 in the City of Hyattsville. The power of voice is also important in using it through art, as she has done spoken word since her freshman year of high school through Lyrikal Storm, and was in the theater program at Hyattsville Middle School. The end goal after finishing her education is to work in diplomacy and improve international policy. She loves to read and will never turn down frozen yogurt or a blueberry tea Italian soda. 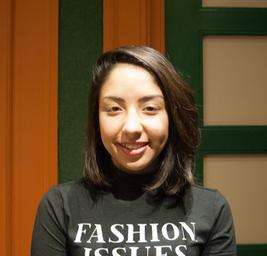 Scroll down to see the list of our Youth Poet Ambassadors.

​​Leilani Clendenin is an honor roll student, and current student enrolled in Suitland High school's performing arts program as a vocal music major. She is also a three time published poet through the Library of Poetry. She has also tried her hand at short stories and fiction in the Write-A-Book competition twice, receiving the placement of Honorable Mention. She believes in giving back to her community, as she volunteers at a local church as a camp counselor. Her hope is to combine my passions for writing and music to impact the world. 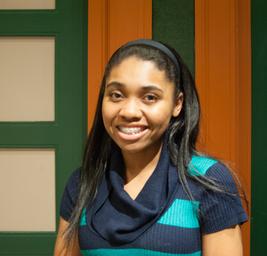 ​​Kiah Patterson, also known as NoVA is a student at Parkdale High school and a member of the youth poetry group Lyrikal Storm. Besides her duties to her artistry and writing, she also believes in her duty to help community and neighborhood. Her own way of helping is to tutor on Mondays and Wednesdays in order to help others succeed and thrive. 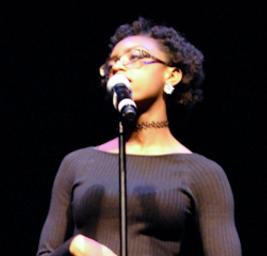 In all honesty, I'm still an amateur poet but I can say that being an amateur I have been extremely blessed within my poetry community. This past summer I have been able to travel to Atlanta, Georgia to participate in Brave New Voices poetry competition and festival and I can honestly say that it was the most eye opening experience in my entire life. While I was at Brave New Voices (BNV) I was able to perform in front of hundreds of people during the opening ceremonies as a winner of the “I Want To Live” poetry contest 2-3 months prior and I am still so grateful for that. I've performed poetry several other times including Oxon Hill High School, in several area open mics, and I once attended the DMV Louder Than A Bomb poetry competition. I am also a member of my schools drama department, poetry club and as well as a student at Words Beats and Life. All of which has been prepping me for on stage performances, writing, and so many other aspects that has been contributing to my poetry. I can only hope to continue to grow not only as a poet but as a person, as I know I have such a long way to go, and am very excited for the journey! 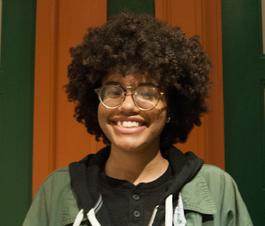 ​Tai'won Gladden is a current student of Suitland High School. She has always loved to write and as her love of poetry began to come to fruition so did her love of rap and emceeing. She is not just your typical poet however, she also has a passion to cheer. Poetry and other forms of writing are both her stress reliever and coping mechanism. She hopes she can use her poetry to inspire others to believe in themselves and their dreams.

Myah Hale is a 9th grader attending Parkdale High School for a program, titled International Baccalaureate (IB). With her intellectual abilities, she has maintained a GPA average of 3.8. Myah Hale participates in and is a member of Lyrikal Storm, which is an arts education program and youth poetry organization. Her membership and integrity allows her to be a youth activist for her community. Myah Hale believes that throughout everything that one does in life, there is an art to it.

Dione Smith is a 16 year old youth poet and toastmasters grand for over five years. Dione is also a competitive speaker. On both the local and national level, which gives Dione's body of work in slam poetry a diversity and creative edge that is unique and original. Outside of competitive writing, Dione also volunteers to help the children at a local day care facility, bringing Dione's community advocacy and talents full circle. 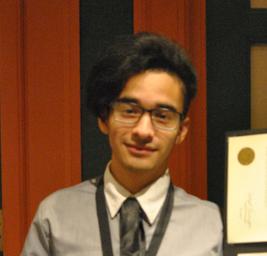 Cici Felton is a creative writer, spoken word artist, and youth activist who lives in Landover Hills, Maryland. She has been writing since age 9 and is a two-time member of the DC Youth Slam Team, as well as the former President of her school’s poetry club Lyrikal Storm. She has performed in various global venues including South Africa, Switzerland, the Kennedy Center, George Washington University, and the Harlem Renaissance Festival. Her book, “Daddy’s Little Girl: Gone in 3 Minutes” is a culmination of keen observations of the world in which she lives. Her goal is to touch others with her story and let the audience know her truth. She enjoys mentoring youth and changing lives with her words and believes poetry is therapeutic and saves lives. 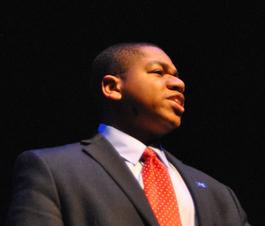 ​Dominique Holder is a current senior at Oxon Hill high school in Oxon Hill, Maryland. She has performed at various places around the DMV, including the Kennedy Center. She enjoys reading, writing, and watching documentaries. She is the poetry club president at her school. In college she hopes to further her studies in literature. She aspires to work within nonprofits in the future. 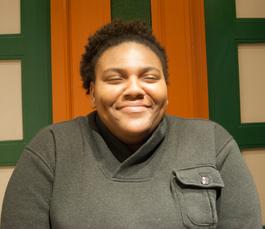 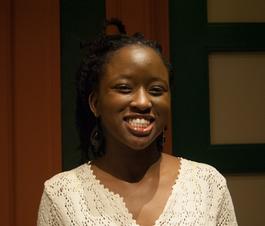 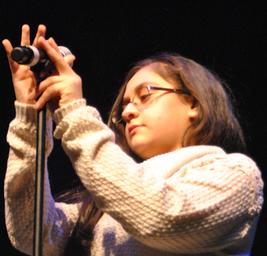 Emerson Garcia is a member of the Lyrikal Storm poetry team of Parkdale High School. He is humbled to have a space amongst the top 13 poets of Prince George's County and to have his words and body of work seen by others in a space that welcomes him and allows him to feel at home.

A’dora Willis is both a hardworking and dedicated individual. She has maintained a 4.0 GPA while also working, and pursuing her love of performing arts. As the oldest of two siblings, her ultimate aspiration has been to inspire both her siblings, and teens in her community by setting a standard of achievement and excellence. She began writing in the 3rd grade as she joined DC Scores. She has performed at multiple venues that included The Capital, Union Station, and for the esteemed Jesse Jackson and his son. She has also participated in the National Poetry Slam in New York City, winning the overall competition. She wholeheartedly believes that her work is not just for winning titles, but also meant to spread positive messages and alter the opinions that are keeping us all bound.